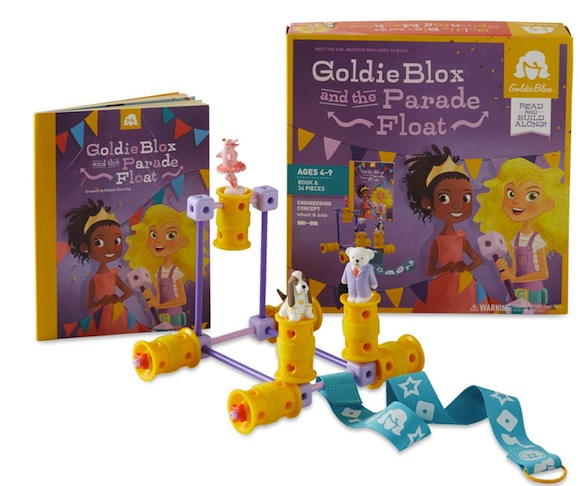 Being a girl shouldn’t mean being relegated to playing with just Barbies and E-Z Bake Ovens. Don’t get us wrong, those things are great, and you can really eat the E-Z bake food. But if you don’t expose a young girl to the idea she can build stuff just like boys can, twenty years down the line, some idiot neckbeard is still going to be talking about how women just aren’t cut out for math and science and engineering. So nip that stupid trope in the bud by buying your niece or daughter (LOL, who among you even has kids?) Goldie Blox from the Brooklyn Robot Foundry.

Goldie Blox is a toy predicated on the idea that young girl will absolutely build shit if you give them a toy where that’s an option. To keep them interested, the building comes attached to a story, which in the case of the parade float, involves building a parade float for a princess pageant. Then they build the parade float, and from the looks of it, the set can also be constructed in other way. Your daughter could make a pretend neckbeard death ray out of the set, for instance, because it’s never too early to teach a young girl the joys of misandry. Goldie Blox and the Parade Float, $19.99 at the Brooklyn Robot Foundry (303 3rd Avenue, Gowanus)