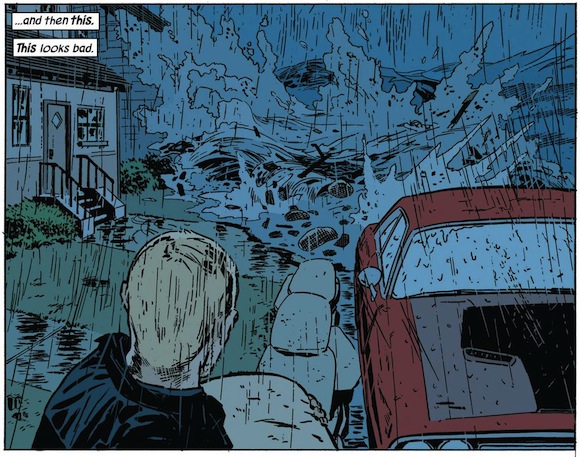 Superheroes usually have problems we couldn’t possibly understand, which we guess comes with the territory when you can lift a building for a morning workout. Not Clint Barton though, better known as Hawkeye. Clint might be an Avenger and the greatest archer in the universe, but he’s still just a schlub living in Bed-Stuy who wants to hang out with his neighbor and his dog. Or at least, that’s what his story is now. The new version of Hawkeye, as imagined by Matt Fraction and David Aja, takes place in our humble borough, but instead of dealing with megalomaniacs who destroy rows of brownstones, Clint deals with more mundane villains like a local gang of hoods, and in one issue, Hurricane Sandy.

Hawkeye Volume 2 is worth it for that issue alone, one that sees Clint rescue his neighbor’s father from a flooding Rockaway, and his co-star in the comics ride out her Sandy experience on the Jersey Shore. It’s a rare instance of a superhero being basically as helpless as we all were, but it never becomes treacly or overemotional. Beyond that, the whole comic pops with 60s-inspried art and onomatopoeia for the action. You’ll never be a superhero, but you’ll have plenty of days where you feel like Clint Barton Hawkeye Volume 2: Little Hits, $16.99, buy it at your local indie bookstore