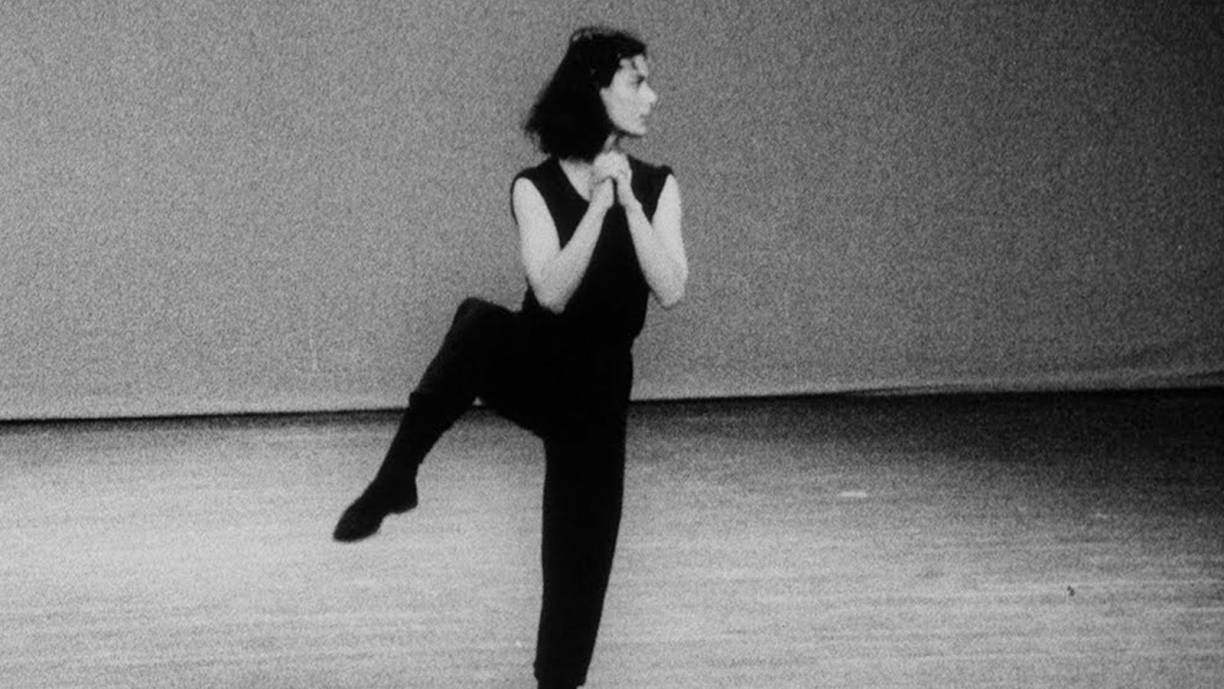 Wednesday, April 22nd, ISSUE presents an evening of pioneering work from choreographer and filmmaker Yvonne Rainer and composer David Behrman. Highlighting the artists’ work interpreted and presented by a new generation of artists, the evening features choreographer and performer Brittany Bailey and Yvonne Rainer herself performing Remembering and Dismembering Trio A (1966 – 2020), with excerpts from Peter Schjeldahl’s “77 Sunset Me,” recently presented at Judson Memorial Church. The program also features David Behrman’s Open Space with Brass, performed by Ed Bear and an ensemble under the direction of Chris McIntyre featuring Lester St. Louis, Nicole Kuester, and Alexandria Smith. The piece was originally commissioned for the final performances of the Merce Cunningham Dance Company at the Park Avenue Armory in December, 2011.

Remembering and Dismembering Trio A (1966 – 2020), with excerpts from Peter Schjeldahl’s “77 Sunset Me,” is choreographed by Yvonne Rainer and performed by Brittany Bailey and Rainer. Rainer choreographed Trio A in 1966, and performed it for the camera in 1978. Written for a solo performer, it incorporates no music and features a seamless flow of everyday movements like toe tapping, walking, and kneeling. In an interview with Lyn Blumenthal, Rainer describes “[It] would be about a kind of pacing where a pose is never struck […] There would be no dramatic changes, like leaps. There was a kind of folky step that had a rhythm to it, and I worked a long time to get the syncopation out of it.” Trio A positioned Rainer as a leader among the dancers, composers, and visual artists who were involved in the Judson Dance Theater (which she co-founded in 1962), an avant-garde collaborative that ushered in an era of contemporary dance through stripped-down choreography and casual and spontaneous performances.

David Behrman’s Open Space with Brass follows in the tradition of electroacoustic sound supported throughout the history of Merce Cunningham Dance Company. The piece also refers to the antiphonal music that Giovanni Gabrieli created for the Basilica di San Marco in Venice at the turn of the 17th Century. Gabrieli’s work made such specific use of the cathedral’s acoustics that groups of brass instruments situated in opposing choir lofts could be heard with clarity at distant points. Interactive music software, originally made for the site-specific 15-channel sound system that was in use at the Park Avenue Armory, linked the acoustic and electronic elements of Open Space: a 6-piece ensemble of trumpets and trombones filling the enormous Armory Drill Hall space with live and digitally processed sound. Behrman has recently reorganized elements of this software to be more accessible for other musicians to play. Ed Bear, who returns to ISSUE after an ambitious re-staging of John Cage’s Variations VII in 2016, manipulates the software, while trombonist Chris McIntyre leads an ensemble of cello (Lester St. Louis), french horn (Nicolee Kuester), and trumpet (Alexandria Smith).

The evening will conclude with a Q&A with Yvonne Rainer, Britanny Bailey, David Behrman, and Ed Bear moderated by Chris McIntyre. They will discuss the history, transition, and legacy of their work and as well as the process of teaching, learning, and presenting the pieces.

Choreographer and filmmaker Yvonne Rainer trained with Martha Graham and Merce Cunningham as a dancer, and was a co-founding member of the Judson Dance Theater in 1962. She sought to blur the lines between performers and non-performers, and incorporated gestures and pedestrian movements, as well as classical dance steps and theatricality into her choreography. Her body of work has spanned multiple disciplines and movements including dance, film, minimalism, conceptual art, and postmodernism. In 1972, Rainer transitioned to filmmaking following a fifteen-year career as a choreographer and dancer from 1960 to 1975. After making seven experimental feature-length films, she returned to dance in 2000 via a commission from the Baryshnikov Dance Foundation (“After Many a Summer Dies the Swan”). Her dances and films have been seen throughout the U.S., Europe, and Asia in concert halls and museum retrospectives. Her publications include “Feelings Are Facts: a Life,” “Work: 1961-73,” “The Films of Yvonne Rainer,” “A Woman Who…: Essays, Interviews, Scripts,” “Moving and Being Moved,” and “Poetry.”

Brittany Bailey has trained with Merce Cunningham as well as whirled with the dervishes of the Mevlevi Order. Bailey has performed at MoMA with Yvonne Rainer in the exhibition, Judson Dance Theater: The Work Is Never Done (2018) and in Marina Abramović’s retrospective, The Artist is Present (2010). In 2011, Bailey was a member of the Michael Clark Company for performances at the Tate Modern. Bailey currently studies at Columbia University.

David Behrman is a composer and artist active since the 1960s. Over the years he has made sound and multimedia installations for gallery spaces as well as musical compositions for performance in concerts. Most of his pieces feature exible structures and the use of technology in personal ways; compositions rely on interactive real-time relationships with imaginative performers. Together with Robert Ashley, Alvin Lucier and Gordon Mumma, Behrman founded the Sonic Arts Union in 1966. He had a long association with the Merce Cunningham Dance Company as composer and performer, created music for several of the Company’s repertory pieces, and was a member of the Company’s Music Committee during its last years. Behrman has received grants from the NEA, NYSCA, NYFA, the Japan-United States Friendship Commission, the D.A.A.D., the Foundation for Contemporary Arts and the Henry Cowell Foundation. He was a fellow at the American Academy in Berlin in 2016. Audio recordings of his works are on the XI, Lovely Music, Pogus, New World, WERGO, and Alga Marghen labels.

Ed Bear is an American interdisciplinary artist, musician, and engineer. Their work with robotics, sound, video, transmission, and collective improvisation recalibrates social relationships with material technology and waste. As an educator and designer committed to an equitable, open source world, they research material reuse as social practice. Bear has been awarded several competitive residences, fellowships and grants. They completed artist/technology residencies at Pioneer Works (2019), Harvest Works (2017), Signal Culture (2017), Until 11 (2016), Wave Farm (2015), LMCC Swing Space (2012), Free 103.9 AIRtime Fellow (2010) and received a Roulette Emerging Composer Commission (2008). They have shown work at various galleries and institutions internationally. Bear has toured extensively in North America and Europe as a performer and teacher, working with organizations including: The London School of Economics, IXDA, Museo Tamayo, The Mattress Factory, The Montreal Pop Festival, Moogfest, and Oberlin Conservatory of Music. Their music is available on Peira, Azul Discographica, Ever/Never, Roar Tapes, and several other record labels. In 2009 and 2010, Bear received NSF and other funds to study e-waste streams as educational resources, software defined radio, and novel energy harvesting, utilizing ionic polymer metal composites. As a research specialist at the Lighting Research Center (2012-2013), funded by the Environmental Protection Agency, they developed control solutions for emerging solid-state lighting systems. Until 2019, they worked with littleBits, Inc. developing gender-neutral, modular electronics for education. Bear recently founded Kin Circuits, a platform to elevate maintenance, care, repair, and reuse in the face of unsustainable consumption and alienating technologies.

Christopher McIntyre leads a varied career in music as a solo and ensemble performer, composer, and curator/producer. He performs on trombone and synthesizer in a variety of settings, from chamber music to open improvisation. Current projects include leading TILT Brass and 7X7 Trombone Band, and collaborative efforts such as UllU duo (w/ David Shively), Either/Or, and Ne(x)tworks. His playing is heard on recordings released by the Tzadik, New World, Mode, POTTR, and Non-Site labels. In his composing, McIntyre experiments with improvisative strategies, serialized rhythmic and formal cycles, and symmetrical pitch construction. He has contributed work to the repertoire of TILT, Ne(x)tworks, UllU, 7X7 Trombone Band (for choreographer Yoshiko Chuma), Flexible Orchestra, and B3+ brass trio. Beyond performing and creating music, McIntyre is also active as a curator and concert producer, with independent projects at venues including The Kitchen, Guggenheim Museum, ISSUE Project Room, and The Stone (June 2007), and as Artistic Director of the MATA Festival (07-10).

Lester St. Louis is a New York born and based multi-instrumentalist (primarily cellist), composer and curator. Lester performs in contexts where he feels he can meaningfully contribute, often in context of improvisation, new music and theatre. Lester has performed in the United States, South America and Europe with artists such as Dré Hočevar, Joe Morris, Charmaine Lee, Nate Wooley, MOCREP, Richard Barrett, SZA, Chance the rapper, Jaimie Branch, TAK Ensemble, The sugar glass theatre company, Soho Rep and many others. As a composer Lester is currently and in the near future composing for Rage Thrombones, JACK Quartet, Mahan Esfahani and Stefan Jackiw.

NYC-based horn player Nicolee Kuester divides her time between experimental music and the Older Stuff, recently performing with the International Contemporary Ensemble, The Knights, and Wet Ink Ensemble in NYC; Ensemble Intercontemporain in Paris; Alarm Will Sound in St Louis; and Kaleidoscope Chamber Orchestra in LA. She is co-founder of MEANINGLESS WORK, a performance series that meanders between sounds, performance art, text, and movement theater.

Praised by The New York Times for her “appealingly melancholic sound” and “entertaining array of distortion effects,” Alexandria Smith is a trumpeter, composer/multimedia artist, curator, and recording engineer studying at the University of California San Diego. Her current projects focus on the use of biofeedback as an interfacing tool for musicians, interactive media (audio and visual), and performance based research. Previous engagements include her week (curation) at the Stone, performances at the La Semana Internacional de Improvisación, trumpet and electronics Luminous Tubes Concert at the FONT Festival 2019, performing as a soloist in the Martha Graham Dance Company 90th Anniversary Concert, John Zorn’s Improv Night at the Stone, and as an ensemble member of Lorin Maazel’s Castleton Festival.