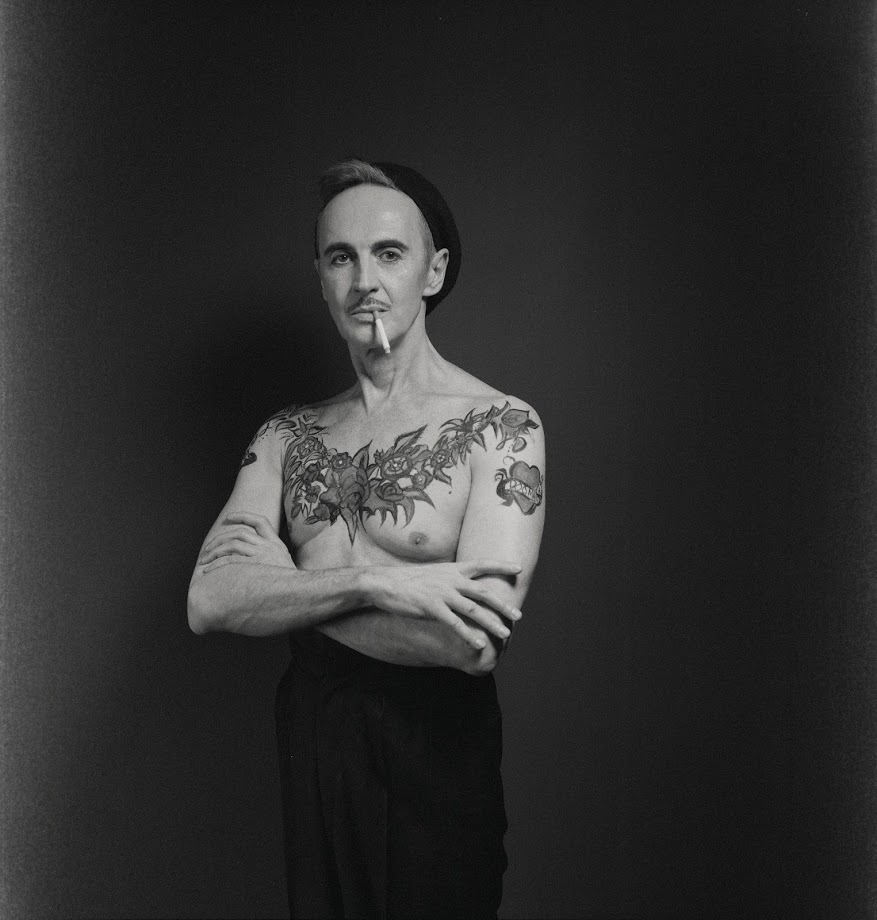 NYU Skirball will present the world premiere John Kelly’s Underneath the Skin, a NYU Skirball commission, running October 11 and 12, 2019 at 7:30 pm at NYU Skirball.

Underneath The Skin is a work that aims to introduce its audiences to the brave life of a creative spirit, and reaffirm the persistence and mettle of social outsiders. Evidence of the lives of most gay men from the pre-Stonewall generations have not come down to us, as these were decades when it was impossible to be ‘out’. The lives of gay, lesbian, and trans people were largely undocumented, been erased, or forgotten, and are therefore missing from our histories. Samuel Steward struggled during The Great Depression, World War 2, the McCarthy era Lavender Scare, took part in the strides that resulted from the Stonewall uprising, and witnessed the sexual revolution and the AIDS epidemic. What makes him unique is that during his long life (he died in 1993 at the age of 84) he was an obsessive documenter, and his papers, personal and ephemera survive, providing a unique window into a gay man who lived his life authentically.

John Kelly says: ”With the constant danger of cultural amnesia (amplified by the losses from the AIDS pandemic), it is crucial that these forgotten lives and stories be remembered, and that inter-generational dialogues continue. The extent of Steward’s tangible legacy proves that gay men devised strategies of living fully through decades of unfathomable repression. This is the primary reason I want to bring attention to his life and work. As a gay and queer man born in the 1950’s I’ve have some experience of pre-Stonewall repression. My aim is to utilize my experience as a way to evoke – through the ‘character’ of Samuel Steward – the details of a life that was driven, dark, sexy and cerebral, but also virtuosic, courageous, celebratory – and in its own way – a liberated manifestation of human expression.”

JOHN KELLY
John Kelly is a performance and visual artist, vocalist and dancer. His performance works are autobiographical or character-driven, and often focus on the struggles encountered by artists and social outsiders, and the nature of creative genius. His works have been performed at BAM’s Next Wave Festival, La MaMa, the Metropolitan Museum of Art, The Kitchen, REDCAT, and London’s Tate Modern. His visual artwork is based in various aspects of self-portraiture, including drawing, painting, photography, and video. A recent solo exhibition Sideways into the Shadows included over 50 hand-drawn portraits of friends and lovers lost to the AIDS epidemic, and he recently completed his first graphic novel, A Friend Gave Me A Book. He has received two Obie Awards, two NEA American Masterpieces Awards; and fellowships from The American Academy in Rome, The Guggenheim Foundation, and the Radcliffe Institute for Advanced Study. johnkellyperformance.org

SAMUEL STEWARD
Samuel Steward (1909 –1993) was a poet, novelist, and university professor who left the world of academia to reinvent himself as an author of erotic fiction (as Phil Andros), and one of the 20th century’s most accomplished and influential tattoo artists (as Philip Sparrow).
Steward gained an introduction to Gertrude Stein in 1932, and so began a long correspondence with Stein, which resulted in a warm friendship. He paid visits to her country home in France, where he met with many other literary figures, including Thornton Wilder (with whom he became lovers), Lord Alfred Douglas (the lover of Oscar Wilde), Thomas Mann, and André Gide. He detailed these encounters, some of them sexual, in his brief memoir, Chapters from an Autobiography. He also described his friendship with Stein and Alice B. Toklas in his Dear Sammy: Letters from Gertrude Stein and Alice B. Toklas. He maintained friendships and correspondences with many influential artists and thinkers of his time, including Paul Cadmus and George Platt Lynes, and Glenway Wescott

Throughout his life he kept extensive secret diaries, journals and statistics on his sex life. Steward met famed sex researcher Alfred Kinsey in late 1949 and subsequently became an unofficial collaborator with Kinsey’s Institute for Sex Research. During his years of work with the Institute, Steward collected and donated sexually themed materials to the Kinsey archive, gave Kinsey access to his lifelong sexual records, introduced him to large numbers of sexually active men in the Chicago area, and provided him with collections of early sex Polaroid photographs which he took during frequent all-male sex parties.
In Chicago in the 1950’s he became one of the country’s most renown tattoo artists, later moving to the San Francisco Bay area, where he was the official tattoo artist of the Hells Angels motorcycle gang. After retiring from tattooing in 1970, Steward wrote a social history of American tattooing published as Bad Boys and Tough Tattoos.

In the 1960s Steward began writing and publishing a series of highly lauded erotica under the name of Phil Andros.
Starting in 2001, Steward’s biographer Justin Spring tracked down Steward’s archive and began writing Secret Historian: The Life and Times of Samuel Steward, Professor, Tattoo Artist, and Sexual Renegade, published by Farrar, Straus and Giroux in 2010. The book was the recipient of many literary honors, and was a finalist for the National Book Award.

NYU SKIRBALL
NYU Skirball, located in the heart of Greenwich Village, is one of New York City’s major presenters of international work, and has been the premier venue for cultural and performing arts events in lower Manhattan since 2003. The 800-seat theater, led by Director Jay Wegman, provides a home for internationally renowned artists, innovators and thinkers. NYU Skirball hosts over 300 events annually, from re-inventions of the classics to cutting-edge premieres, in genres ranging from dance, theater and performance arts to comedy, music and film.

NYU Skirball’s unique partnership with New York University enables it to draw on the University’s intellectual riches and resources to enhance its programming with dialogues, public forums and conversations with artists, philosophers, scientists, Nobel Laureates and journalists.