The Road Awaits Us 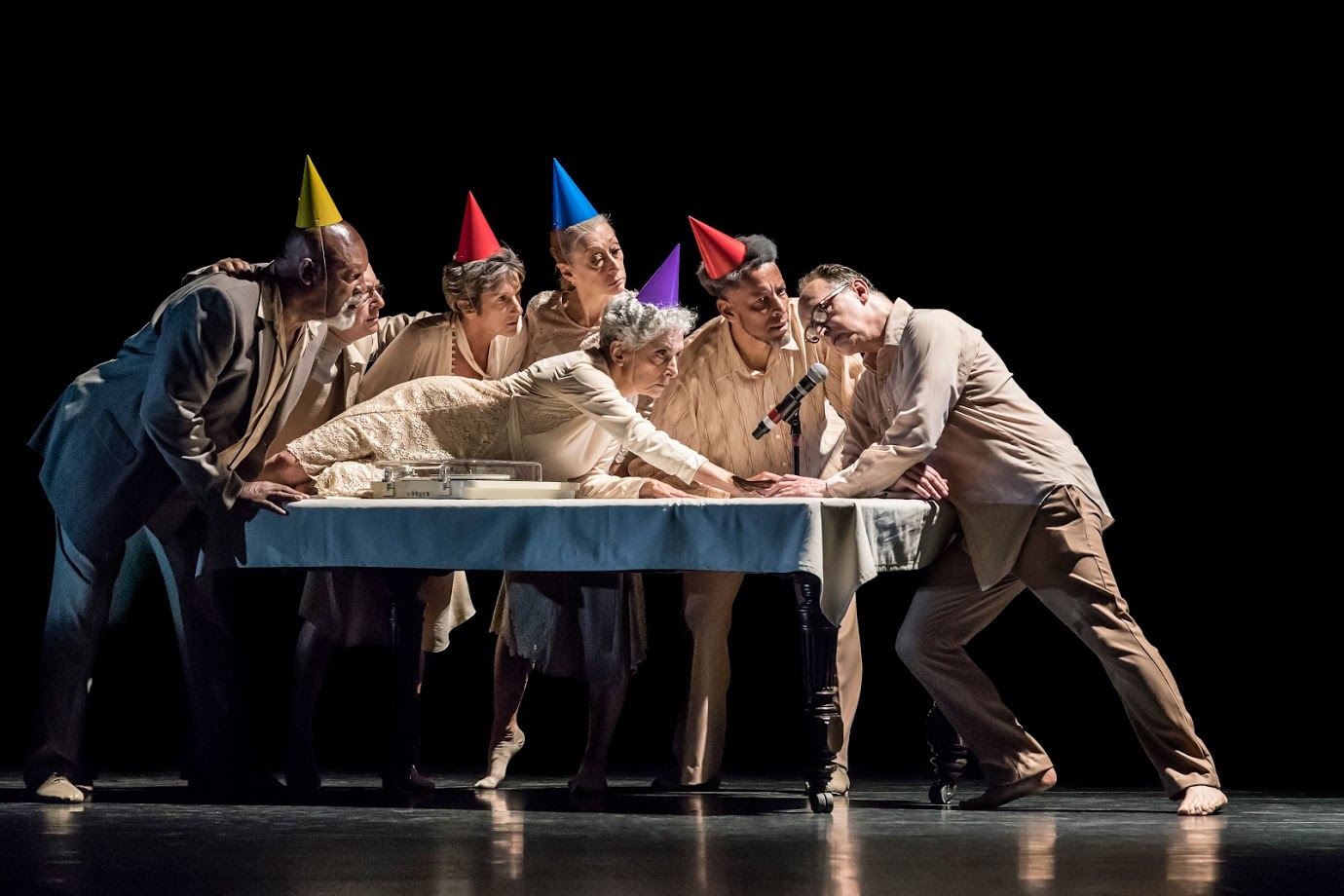 NYU Skirball will present The Road Awaits Us, two North American premieres and one beloved solo from Big Dance Theatre on Friday November 8 and Saturday, November 9 at 7:30 pm at NYU Skirball.

The Road Awaits Us features two North American premieres and a beloved solo from Big Dance Theatre. The titular work, The Road Awaits Us (2016), by Annie-B Parson, was created originally for Sadler’s Wells Elixir Co in London. The dance is based loosely on an absurdist play by Ionesco, staged as a birthday party for a company of esteemed Dance Elders, including Bebe Miller, Meg Harper, Keith Sabado, Sheryl Sutton, George Faison, Black Eyed-Susan, and from the original cast: Betsy Gregory and Brian Bertscher.

Ballet Dance, a North American premiere, is a duet based on the imagery, the fundamental actions, and the materiality of ballet traditions from the 19th through the 21st century.

Back by popular demand, the solo Cage Shuffle: redux, features Paul Lazar speaking a series of one-minute lectures by John Cage from his 1963 score “Indeterminacy,” while simultaneously performing a complex choreographic score by Annie-B Parson.

Big Dance Theater (BDT), under the Artistic Direction of Annie-B Parson, creates original dance/theater works which mix and re-mix dance, music, literary and found text, and rich visual designs. Plot takes a back seat to knowing the world through motion, picture and form, and traditional tales by such authors as Twain, Tanizaki and Euripides become both metaphor and frame for the dilemmas of the contemporary, globalized present. For 28 years, BDT has worked to create over 20 works, generating each piece over months of collaboration with its associate artists, a long-standing, ever-evolving group of actors, dancers, composers and designers. BDT received New York Dance and Performance “Bessie” Awards in 2002 and 2010; the company was awarded an OBIE in 2000 and BDT company members have received 6 other “Bessie” Awards and an OBIE award for their work with BDT. In 2007 the company received the first-ever Jacob’s Pillow Dance Award. BDT has been presented around the world and in the USA at venues including: Brooklyn Academy of Music, Dance Theater Workshop, The Kitchen, Performing Garage, New York Live Arts, The Chocolate Factory, Japan Society, Jacob’s Pillow Dance Festival,

Museum of Contemporary Art (Chicago), Walker Art Center, On the Boards and The Spoleto Festival. Most recent commissions have been from The Old Vic/London, The Brooklyn Academy of Music, The Kitchen, Les Subsistances in Lyon, Chaillot Theatre National in Paris andThe Walker Art Center.

BDT’s rigorous use of dance in a theatrical context, and the collision of forms this juxtaposition creates, helps to define the company’s work as unique in the field of performance. BDT’s dance material is central to the work, rather than supportive. Ranging from pure dance pieces to dance/theater work steeped in text, music and literature, BDT’s work is fundamentally based in the body. The hyper-visual, kinetic and multi-stream interpretations of literary, found and classic texts that BDT creates, serves as a real-time response to the globalized present in which we live, with its dense layering of images, cultures, signs and multiplicities of meaning. bigdancetheater.org

Annie-B Parson co-founded Big Dance Theater in 1991, and with BDT she has created numerous large-scale works for such venues as BAM, The Old Vic/London, Sadler’s Wells/London, The Walker, The National Theater/Paris, and The Kitchen. Parson has also made choreography for rock shows, marching bands, movies, museums, objects, television, augmented- reality, opera, ballet, theater, symphony orchestras, string quartets, and a chorus of 1,000 amateur singers. Artists she has worked with include David Byrne, David Bowie, St. Vincent, Mikhail Baryshnikov, Wendy Whelan, Anne Carson, Laurie Anderson, Nico Muhly, The Martha Graham Dance Co., and Jonathan Demme. Her work with David Byrne began in 2007 with his tours with Brian Eno, and then St. Vincent. Their most recent work, American Utopia, is on Broadway this Fall. Parson’s new book on choreography will be published by Wesleyan Press. Parson has received awards that include: The Guggenheim Fellowship, Doris Duke Award and an Olivier nomination.

Tickets
The Road Awaits Us will play Friday, November 8 and Saturday November 9 at 7:30 pm. Tickets begin at $35 and can be purchased online at www.nyuskirball.org, by phone at 212.998.4941, or in person at the Box Office, 566 LaGuardia Place at Washington Square: Tuesday-Saturday, 12:00–6:00 P.M. (NYU Skirball is located at 566 LaGuardia Place at Washington Square, New York, New York 10012. www.nyuskirball.org