The Anagram Ensemble: I Looked at the Eclipse by James Ilgenfritz & Sarah Krasnow 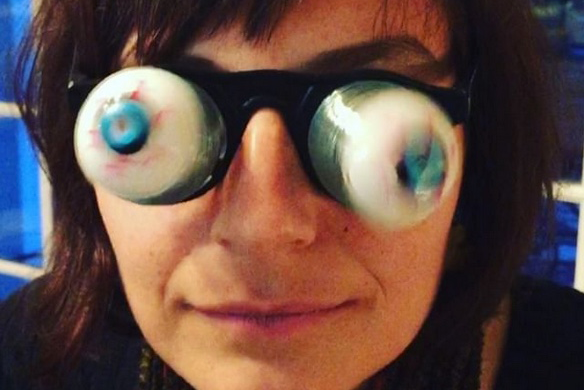 Composer James Ilgenfritz’s Anagram Ensemble presents I Looked At The Eclipse—a new opera that blends video, theater, language games, free improvisation, and chamber music. The bilingual work is presented in French and English. Using a solar eclipse as a metaphor for a widespread epidemic of problematic human interactions that range from the mundane to predatory, the work is a surreal vision of self-regulation in a society obsessed with shifting culpability and consequence.

Anagram Ensemble also gives the World Premiere of Pittsburgh-based Colombian-American composer Federico Garcia De Castro’s Themuru, for two guitars, two percussionists, clarinet, saxophone, viola, cello, and bass. The title is itself a reference to Anagram—”Themuru” is the name given by the Ancient Greeks to the practice of finding hidden and mystical meaning in words by changing the order of the letters.

The evening begins with James Ilgenfritz’s In The Summer Every Truth Is Like A Saturday. Originally composed for and premiered by the Vienna-based studio Studio Dan, this slight re-orchestration finds Anagram Ensemble’s core performers mixing found objects, jazz-influenced improvisation, and chamber music precision to explore a permeable boundary between performative conceptual actions.

Founded by James Ilgenfritz in the early 2000s, The Anagram Ensemble integrates chamber music and jazz improvisation, while incorporating esoteric texts and concepts from the literary and philosophical worlds, as well as unorthodox traditions in the visual and performance art world.

Sarah Krasnow is a director, performer, dramaturg, writer, and French teacher. Recent productions include Secrets of Green-Wood, a shadow puppet play, at the Brick Theater, and I Looked at the Eclipse, a theater-dance-music collaboration, at Triskelion Arts. Sarah recently appeared in the feature film Madame de Void, directed by Felix Bernstein and Gabe Rubin, which was on view at David Lewis Gallery in July 2018. In 2016-2017, Sarah performed in and served as dramaturg for the Motherland series by performance artist Cecilia Corrigan at Issue Project Room and the Brick Theater. Sarah also directed her own translation of Le Problème by French playwright François Bégaudeau for the 2015 ARACA Project. You can also catch her on The Deuce, The Marvelous Mrs. Maisel, and Billions. BA: Vassar College. MFA: Yale School of Drama. MA: Université d’Avignon.

Born in 1980, Yuri Zupancic is an artist from Dodge City and Lawrence, Kansas, USA now based in Paris, France. Largely self-taught, he creates and exhibits paintings, drawings, sculptures, video art, installations, and hybrids of these mediums. Raised in the great landscapes of the American West, he continues to find inspiration in nature while exploring the contemporary human condition and the ambigous effects of modern technology. Yuri’s works have been exhibited at galleries, museums, art fairs, and unconventional spaces in Paris, London, Berlin, New York, San Francisco, Aspen, Sydney, and been published by Huffington Post, WIRED, Juxtapoz, and many others. Yuri is also the co-founder of PRYZ Agency, which works with international artists, estates, and art institutions to organize and facilitate exhibitions and publications.