Swamp Mami: A Pop Up Shop by Elle Barbeito 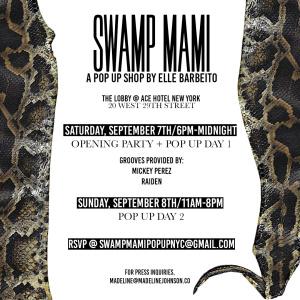 Miami-based designer and visual artist Elle Barbeito returns to the lobby at Ace Hotel New York with SWAMP MAMI, a pop up shop showcasing her python skin and leather designs.

After spending four years in New York and witnessing firsthand the environmental impact caused by the fashion industry, Elle’s intentions and motives as a designer began to grow after moving back to Miami. Her process took on more of an organic approach, which led her to fully familiarize herself with leatherwork, and the process of hunting, skinning, and preserving the skins of ecologically invasive Burmese Pythons. This concept has developed into an entirely new direction for her work, visually functioning as a way to reclaim the delicate and brutal balance of South Florida’s biodiversity.

Join Elle on Saturday, September 7 from 6pm – 2am for the opening of the pop up. Shop the new collection &groove to Mickey Perez (6pm – 10pm) and Raiden (10pm – 2am). Get a glimpse into Elle’s world in an exclusive short documenting her process (directed by Razieme Iborra).