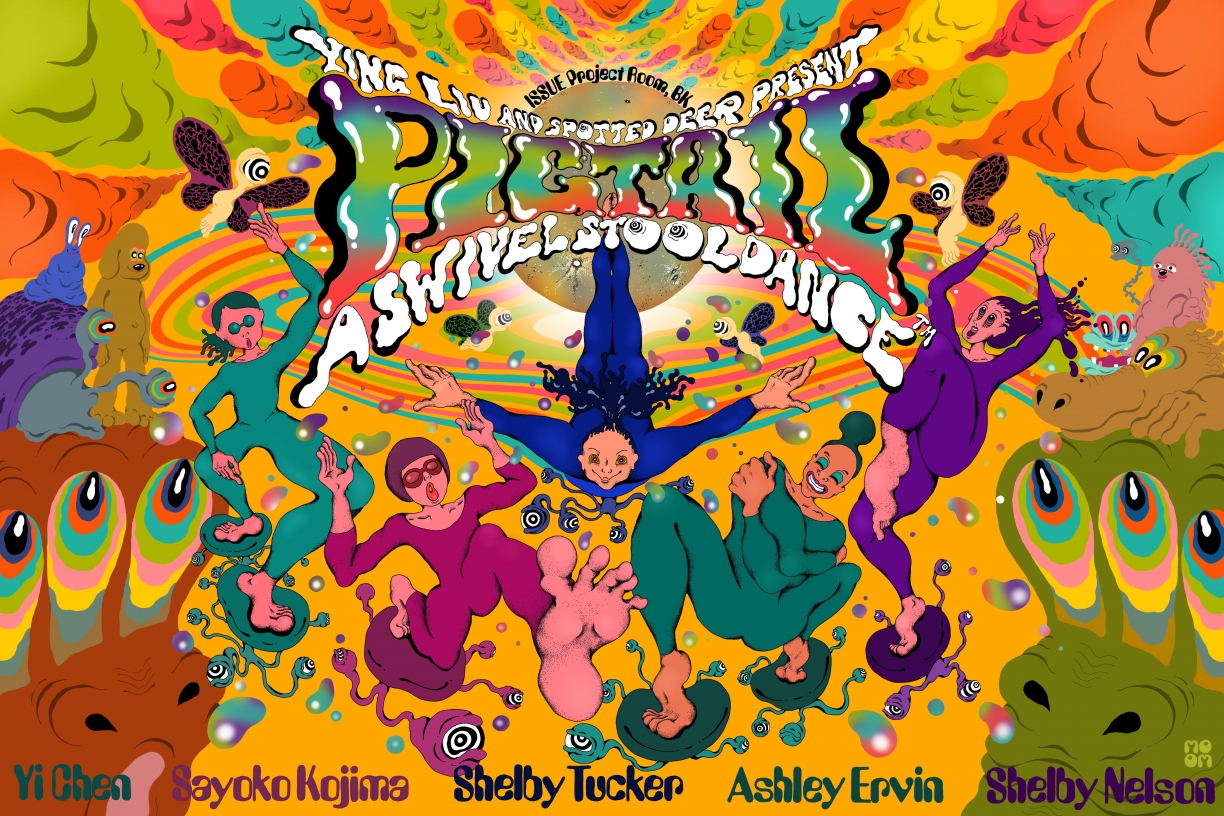 September 13th & 14th, multimedia artist, experimental hodgepodge-ist, and 2019 ISSUE Artist-In-Residence Ying Liu (@makeafountain) premieres PIGTAIL – A Swivel Stool Dance™, a new movement work utilizing swivel stools (deconstructed office chairs). Distilling a year-long process into an hour, a cast of dancers (Ashley Ervin, Sayoko Kojima, Shelby Nelson, Shelby Tucker and Yi Chen), have adapted to these chairs as extensions of their bodies, together developing a brand new technique. The choreography incorporates sports actions seen in synchronized swimming and rhythmic gymnastics as foundational sources of individual and collaborative movement. During the performance, the audience is also seated in swivel chairs, with the dancers using their motions to influence the overall fluidity of the room.

In summer 2017, Ying staged a three-episode outdoor play, HANG OUT, in Manhattan Chinatown’s Sara D. Roosevelt Park. For the production, she used a shopping cart to transport overflowing props back-and-forth between Manhattan and Brooklyn many times. She describes, “What surprised me was how I kept getting better at wheeling it […] after a month-and-a-half, by the end of the production, I was able to roll the cart on a variety of road conditions without disturbing its contents.” PIGTAIL is inspired by such a tiny phenomenon and humanity’s ability to progressively adapt to our circumstances. The entire cast began the rehearsal process completely unfamiliar with the swivel stool beyond its immediate function. However, through rigorous practices since October 2018, the group has been walking, skating and moving more freely with the stools.

PIGTAIL is a dance of our technological time, where knowledge has become both increasingly inaccessible and available. In her notes on the piece, Ying describes how knowledge has become rapidly and exponentially specialized and at times made inaccessible in today’s society, especially when being vertically integrated by corporations, institutions, or other sources. For example, a self-taught automobile mechanic may not be able to open and fix a Tesla; or, often, everyday people may have no idea what happens within their laptops or the apps they use on a daily basis. However, knowledge, even certain niche know-hows, have also become horizontally and readily available to the public. Ying, a non-professionally trained choreographer, for instance, has benefited tremendously from online and digital sources and reservoirs of information, powered by consumer technology: youtube, online articles, forums, applications, and hardware. PIGTAIL, in a sense, is a “consumer-level product” set against the complexity of our time as its backdrop.

“Sapiens are tireless, nuts, dreamers. I think about how we arrived at skyscrapers, A/C, GMO crops, etc. [and] how all of this stems from our ceaseless, feverish fantasies towards higher, stronger, faster, better.” Ying adds, “step-by-step, such restlessness informs us about who and what we are.” The swivel chair then, and the dancer’s relationships to it, becomes a symbol for human aspiration, and, ultimately, our drive towards achievement.

Capacity for each evening is limited. A $5 RSVP commitment is asked to ensure seating. For optimal mobility the audience is encouraged to bring few or no belongings. Following the September 14th performance, the cast and Ying Liu will host a brief talkback discussing the process of the piece.

Ying Liu is a Brooklyn-based multimedia artist born and raised in a small island named Zhoushan in the East China Sea. Her evening-length, hybridized works often mix consumer technology such as VR, GoPro and GPS, and fuse mediums including theater, dance, video, and performance art with DIY props and an exuberant sense of play. The diverse, multi-generational casts of her projects range from professional ballet dancers, sociologists, house music DJs, psychotherapists, scientists and filmmakers — sometimes all in the same performance. Highlighting the shifting, participatory nature of viewership, mediated in real time by everyday use of technology, her practice reveals how experimentation is most fruitful when it escapes predetermination. Poking at the traditional boundaries between performer and spectator, she stirs together contradictory forces of memory, spatiality, and the inherent friction of sociality. New York’s Emily Harvey Foundation has presented her projects in numerous solo showings including performative screening (O Ppl Prefer) Techshting A(ny)way (2014), Don’t Be Shy, Man! — a hybrid show inspired by Stuart Sherman’s poetry (2014), and an evening-length dance performance Now We Start from the Arm (2016). In summer 2017, she staged HANG OUT, a site-specific, three-episode play in Manhattan Chinatown’s Sara D. Roosevelt Park. MAKE A FOUNTAIN, a 302-page catalog accompanying and documenting those performances, was released in April 2018. In August 2018, she led a 6-hour theatrical workshop, an extension of HANG OUT presented by the Northwest Film Forum, in and about Capitol Hill, Seattle, a changing neighborhood where the Forum is located. Following the workshop, she was part of the two-person show Cooked Two Ways, with artist C. Spencer Yeh at gallery Chen’s in Bushwick, Brooklyn. She is a resident artist at Lower Manhattan Cultural Council 2018-19 and at ISSUE Project Room 2019. @makeafountain

Originally from St. Louis, MO, Ashley Ervin is a booty shaking, head bobbing, dancing machine. She spends her days picking apart and nibbling on the psyche’s of her patients as a Dance/Movement Therapist. You might also find her crawling around on the floor, singing funny songs, and watching episodes of Mickey Mouse clubhouse. Between those activities, she manages to professionally dance with companies such as the Treehouse Shakers and Kaley Pruitt Dance. Ashley has previously worked with Ying Liu doing the cha cha, boogie woogie, and twist and shout in the show Now We Start from the Arm. She is one of the busiest people on earth, but it’s exactly what tames her insanity.

Sayoko Kojima was born and raised in one of the safest neighborhoods in Japan, Midorigaoka, Mobara Shi. She became active, curious, and adventurous which lead her to have her bones fractured three times before she was eight years old. She never liked to sit still on a regular chair; instead, she loved FUN things like music, sports, arts, and crafts. She majored in fashion but it wasn’t fun enough, so she moved to California, but it wasn’t adventurous enough, so she moved to New York, but it wasn’t exciting enough, so she started dancing. She has performed in works by Roshelle Wilder, Kate Mueth, Thea Little, Fatima Logan-Alston, Jamie Watkins and Annalisa Ledson, Daniel Flores, and JoAnna Mendl Shaw. She teaches Pilates and stretch to stay active. As if that wasn’t fun enough, she then met Ying Liu. A dance on wheeled stools? That sounds like one of the most unsafe things one can do. Sayoko describes, “I am not big on sitting on and staying still on stools and prefer to stand up and be creative. It’s been very challenging but very FUN. Please enjoy the show!”

Shelby Nelson is a Brooklyn-based dance artist that was born and raised in Southern West Virginia. She moved to the City of Brotherly Love to study at The University of the Arts under the direction of Donna Faye Burchfield. During her time in university, she worked and performed in pieces by various choreographers such as Helen Simoneau, Andrea Miller/Gallim Dance, Netta Yerushalmy, Bobbi Jene Smith, Sidra Bell, Paul Matteson, Jesse Zaritt, and Katie Swords. She graduated with a Bachelor of Fine Arts in Dance in May of 2018. Shelby now works as a freelance artist in both choreography and performance. Her choreography, being, not a phase, was recently presented at the Theorist Festival in Austin, TX. In her free time she makes jewelry, cooks, makes coffee for the good people of Brooklyn, and talks to animals.

Shelby Tucker is dance artist born and raised in the Washington, D.C area. Named after the girl who dies in Steel Magnolias (thanks, Mom) Tucker’s first aspiration in life was to be a major league baseball player. At around the age of ten, Tucker got into dance through her cousins. She then, at the age of 12, left baseball for dance because she was told “women can’t play in the majors.” Since then, dance has been the center of Tucker’s world. After high school, Tucker studied at The University of the Arts in Philadelphia under the direction of Donna Faye Birchfield and graduated with her BFA in 2018. Tucker likes crime podcasts, bowling, and romantic comedies.

Yi Chen was born and raised in the island country of Taiwan. Her first relationship with a swivel chair lasted for about two years and subsequent relationships did not fare any longer. She is currently involved with a few chairs across New York City on a part-time basis. Yi performed in Ying Liu’s Don’t Be Shy, Man! – a hybrid show inspired by Stuart Sherman’s poetry (2014), Now We Start from the Arm (2016), HANG OUT (2017), and PLAYDATE (2019). @yi.chen.549221