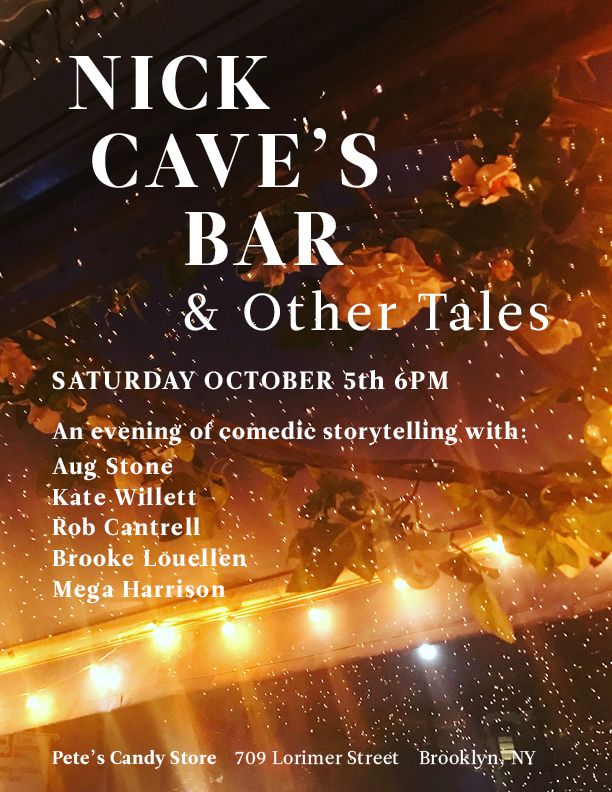 In 1999 Aug Stone & his best friend traveled from Boston to Berlin to find the bar they’d been told Nick Cave owned there. Instead of cocktails at this mythical locale, what followed were nine days of confusion, thwarted plans, and perpetual drunken misery. Stone will be recounting the tale of this extreme misadventure, with other stories by fellow comedians Rob Cantrell, Brooke Louellen, & Mega Harrison.

Aug Stone is a writer, musician, & comedian. He performs comedy as Young Southpaw and as himself. His progressed Western chart is in Gemini, so this makes sense. Stone is the author of “Off-License To Kill” and has written for The Quietus, Under The Radar, The Comics Journal, Red Bull Music Academy, and many other sites and mags. He’s been in a lot of bands, most notably H Bird and The Soft Close-Ups. Check out all of these and more at http://www.augstone.com

Rob Cantrell has been seen on NBC, CBS, HBO, FX and Comedy Central. He acted in sketches on Comedy Central’s Colbert Report, HBO’s Flight of The Concords and FX’s Totally Biased. He has written on projects for Adult Swim, Vice, High Times, Howard Stern and Comedy Central. Cantrell has headlined comedy clubs, theaters and colleges. He has performed Stand-Up at several festivals including SXSW, Bonnaroo and ‘The New York Comedy Festival’. Early in his career, Cantrell was a top ten finalist on the very first season of NBC’s Last Comic Standing, performed Stand-Up on CBS’s Late Late Show and acted in the nationally touring play ‘The Marijuana-logues’. He recently released a new comedy album (2018) titled “Pure Uncut Joy” recorded in Brooklyn, NY for 800 Pound Gorilla Records. Born and raised in Washington DC and Virginia, Rob first started performing comedy when he moved to San Francisco, Ca after graduating from college. Cantrell now lives in Brooklyn, NY, he enjoys walking around, crossword puzzles and designing spaceships with his mind. https://www.robcantrell.com/

Brooke Louellen charms audiences with hilarious tales of dating disasters, womanly woes, and the Mississippi misadventures of her outlandish Southern family. Brooke in Brooklyn on her birthday weekend, perfect.

Mega Harrison became a comic because she told someone she already was one. The crushing anxiety of living with such a spurious claim forced her into a life of publicly confiding her secrets for the amusement of strangers.