Moor Mother/Jerusalem in My Heart 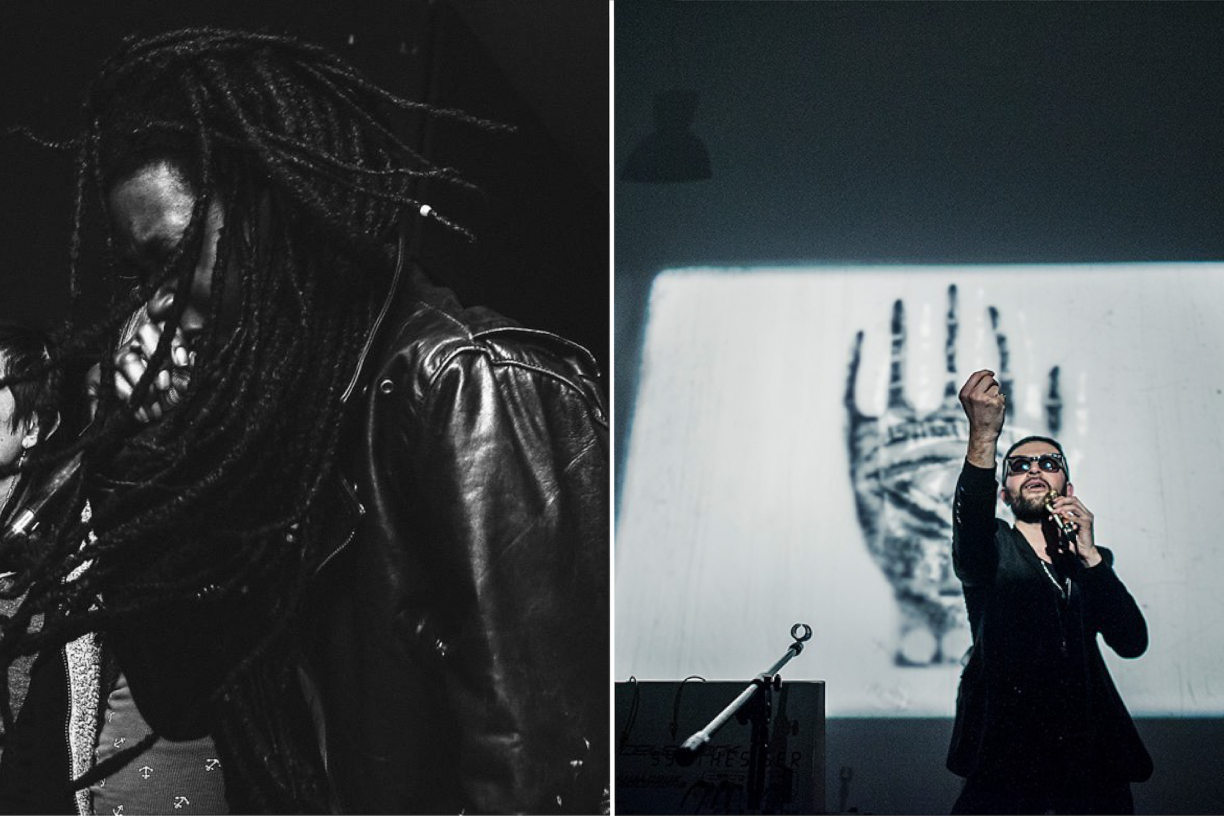 Moor Mother simultaneously wields harsh, cathartic noise and freely improvised textures of cosmic jazz, equally channelling her punk background and the spirit of Sun Ra. Her acclaimed albums Fetish Bones (2016), and The Motionless Present (2017) masterfully reimagined electronic noise as protest songs. During her days in the Philadelphia underground, in the early aughts, Ayewa recorded hundreds of unpolished, self-released songs and played in the local venues where she worked as a show booker. She describes her material as a mixture of “low-fi, dark rap, chill step, blk girl blues, witch rap, coffee shop riot gurl songs, southern girl dittys and black ghost songs,” and has focused on both interrogating and becoming a vehicle for truth. Her work is a vital document of what it means to survive centuries of oppression.

Camae Ayewa (Moor Mother) is a national and international touring musician, poet, visual artist, and workshop facilitator, and has performed at numerous festivals, colleges, galleries, and museums around the world, sharing the stage with King Britt, Roscoe Mitchell, Claudia Rankine, Bell Hooks, and more. Camae is a vocalist in three collaborative performance groups: Irreversible Entanglements, MoorJewelry and 700bliss. As a soundscape and visual artist, their work has been featured at Baltic Biennale, Samek Art Museum, Vox Populi, Pearlman Gallery, Metropolitan Museum of Art Chicago, ICA Philadelphia, Bergan Kunstall, Hirshhorn Gallery, and in a 2018 solo show at The Kitchen NYC. As a workshop facilitator, Camae has presented at Cornell University, MOFO Festival, Moogfest, Black Dot Gallery and others. They are co-founder and curator of Rockers Philly Project, a 10-year long running event series and festival focused on marginalized musicians and artists spanning multiple genres of music. As Moor Mother, she released her debut album Fetish Bones on Don Giovanni records to critical acclaim. The album was named third best album of the year by The Wire Magazine, number one by Jazz Right Now, and has appeared on numerous end of the year list from Pitchfork, Noisy, Rolling Stone, and Spin Magazine. She has since released a second LP, The Motionless Present, commissioned by CTM X VINYL FACTORY 2017. Thanks to her unstoppable energy, she has recently performed at a host of vital festivals and venues including Berhaign, Borealis, CTM Festival, Le Guess Who, Unsound, Flow and Donau Festival, Rewire, Boiler Room, and MoMA PS1.

Jerusalem In My Heart is the acclaimed Montréal–Beirut contemporary Arabic audio-visual duo of musician/producer Radwan Ghazi Moumneh and experimental analog filmmaker Charles-André Coderre. The project has been active since the mid-2000s as a site-specific live performance happening, featuring a wide array of multimedia and theatrical elements, where no two shows were ever the same. In 2012, Moumneh began to reconceive JIMH as a recording project and live duo in which performances could be “repeated,” with an accompanying focus on analog film visuals. 16mm film loops and projections are an integral part of the JIMH aesthetic identity – still frames from these film materials are also used to generate the group’s album art and packaging. JIMH’s three full-length albums to date – all released on Montréal experimental music label Constellation – have variously appeared on year-end lists in such publications as The Quietus, The Wire, A Closer Listen, and others. The project has toured widely in Europe and Canada (with occasional forays into the USA) and has also performed several times in Beirut. JIMH has been a guest curator for Le Guess Who? Festival and Moumneh is also intensely active as an audio engineer and producer, with a long list of Montréal artists and albums to his credit, usually working out of the city’s legendary Hotel2Tango studio, where Moumneh is a co-owner. JIMH has also released a collaborative album with Suuns (on Secretly Canadian) and was featured in an installment of the Grapefruit Records subscription series.