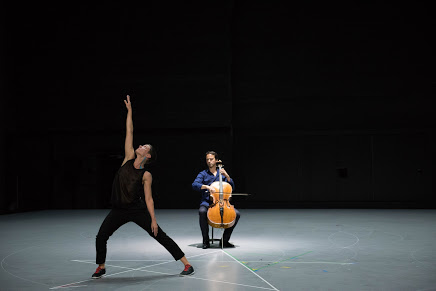 Johann Sebastian Bach’s Cello Suites are considered a milestone in the history of Western music. The title, Mitten Wir Im Leben Sind/Bach6Cellosuiten, (In the Midst of Life/Bach’s Cello Suites), comes from the opening words of a Martin Luther chorale: “In the midst of life, we are in death.” The piece premiered at the Ruhrtriennale festival in Germany in August, 2017.

Placing the acclaimed cellist Jean-Guihen Queyras at the center of the piece, contemporary dance luminary Anne Teresa De Keersmaeker builds on her choreographic language, developed in tune with Bach’s musical one, to capture an affinity between the music and five dancers, of which De Keersmaeker herself is one. In a feat of physical endurance, the suites are played in their entirety, making this a rare chance to hear all six together live.

In 1980, after studying dance at Mudra School in Brussels and Tisch School of the Arts in New York, Anne Teresa De Keersmaeker (b. 1960) created Asch, her first choreographic work. Two years later came the premiere of Fase, Four Movements to the Music of Steve Reich. De Keersmaeker established the dance company Rosas in Brussels in 1983, while creating the work Rosas danst Rosas. Since these breakthrough pieces, her choreography has been grounded in a rigorous and prolific exploration of the relationship between dance and music. She has created with Rosas a wide-ranging body of work engaging the musical structures and scores of several periods, from early music to contemporary and popular idioms. Her choreographic practice also draws formal principles from geometry, numerical patterns, the natural world, and social structures to offer a unique perspective on the body’s articulation in space and time. In 1995 De Keersmaeker established the school P.A.R.T.S. (Performing Arts Research and Training Studios) in Brussels in association with De Munt/La Monnaie. She is choreographer of the current Broadway production of West Side Story.

Jean-Guihen Queyras is a French cellist who specializes in the solo repertoire. He received the 2002 City of Toronto Glenn Gould International Protégé Prize in music and was a regular performer with Ensemble InterContemporain under Pierre Boulez’s direction, developing an avid interest in playing avant-garde and
contemporary music. Queyras is an avid chamber musician and a regular soloist with several early music ensembles, and is renowned for playing the six unaccompanied Cello Suites of Bach. He has performed with many of the world’s great orchestras and is an artistic director of the Rencontres Musicales de Haute-Provence. He plays a 1696 cello by Gioffredo Cappa.

Rosas was founded by Anne Teresa De Keersmaeker in 1983 during the creation of the piece Rosas danst Rosas. The relationship between movement and music is essential to De Keersmaeker’s concept of dance. Rosas has expanded the art of dance as an act of writing movements in space and time and has over the years explored choreography in partnership with other compositional forces, namely music, geometry, the visual arts and language. De Keersmaeker’s engagement of these disciplines has involved collaborations with experts — musicians, composers, visual artists, actors, writers — who have at different times been integral participants and performers in Rosas productions. rosas.be/en/

ABOUT NYU SKIRBALL
NYU Skirball, located in the heart of Greenwich Village, is one of New York City’s major presenters of international work, and has been the premier venue for cultural and performing arts events in lower Manhattan since 2003. The 800-seat theater, led by Director Jay Wegman, provides a home for internationally renowned artists, innovators and thinkers. NYU Skirball hosts over 300 events annually, from re-inventions of the classics to cutting-edge premieres, in genres ranging from dance, theater and performance arts to comedy, music and film.

NYU Skirball’s unique position within with New York University enables it to draw on the University’s intellectual riches and resources to enhance its programming with dialogues, public forums and conversations with artists, philosophers, scientists, Nobel Laureates and journalists. nyuskirball.org.