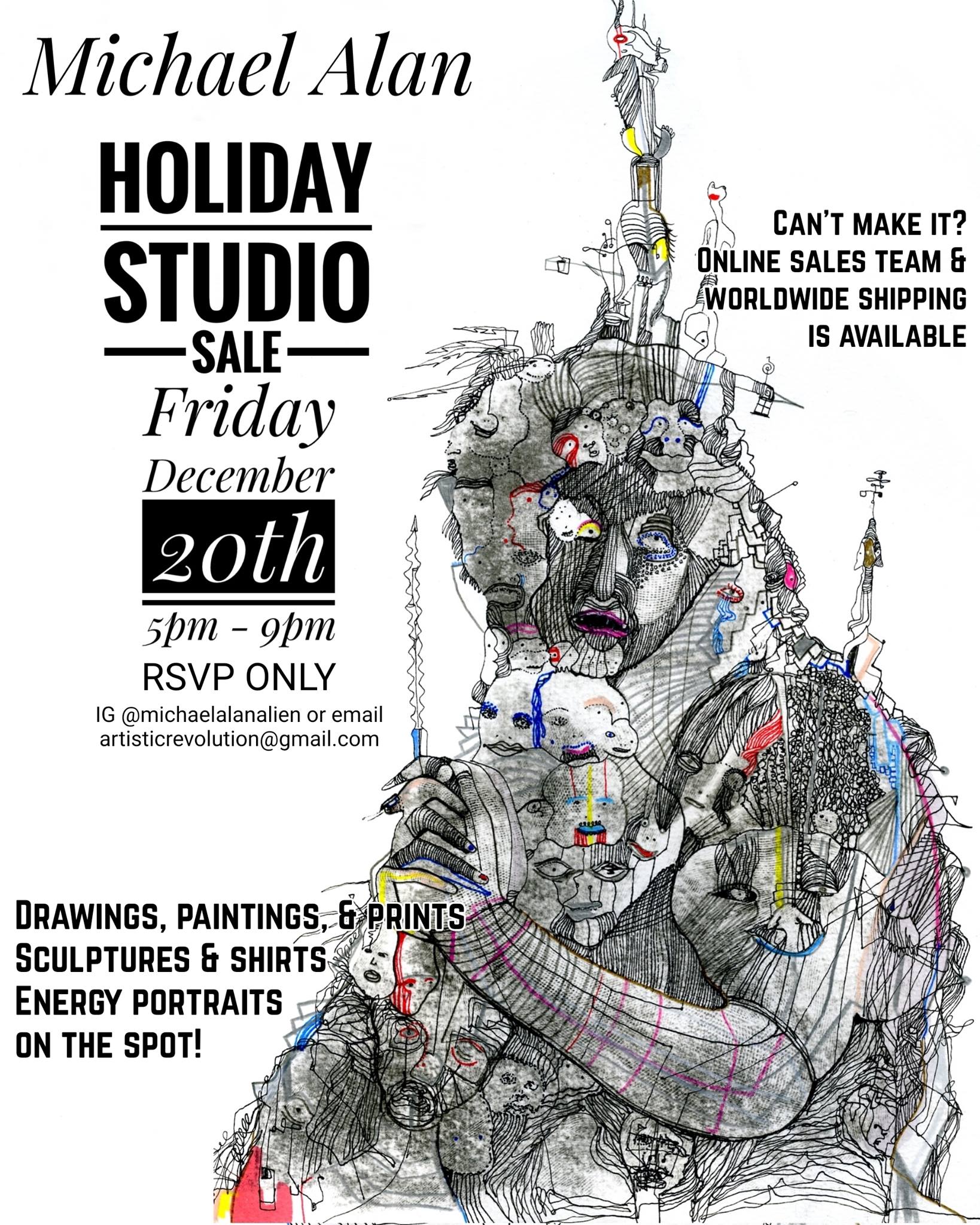 Established native New York fine artist Michael Alan opening his studio for a RSVP holiday sale of his work. Hundreds of drawings, paintings, prints, sculptures, and shirts available. Commissioned portraits, drawn on the spot. Get some art for yourself, your family, and friends!

Serious interest only, DM @michaelalanalien on Instagram or email [email protected] to RSVP. Can’t make it? An online sales team and worldwide shipping is available.

Michael Alan’s work occupies a living, color coordinated, extra dimensional, linear­­ stage, where everything is happening at the same time. He creates multiple overlaying and underlying techniques to create a beautiful, yet raw and fragile visual language. Various figures and abstract elements pulsate and unfold at the same time in his work. He defines it in Alan Ket’s short film as “figurative abstraction”.

Michael’s work ranges from comedic, satyrical, and sinister to lovely and kind, raw and emotional to punk, fashionable to unfashionable, and destructive to harmonic. It contains colorful overlapping continuous detailed line work. The subject ranges from beautiful figures to raw New York commentary. There are paintings inside paintings inside paintings. You can look and see a homeless man fighting a knight on a horse from the Renaissance, or just see what you want to see. Michael’s main goals as an artist are to represent New York City, to never give up, never stop growing, and to create work every day and every night.
Every use of material from oil to ink to pastel to spray, even cut ups of the artist’s own drawings are combined into epic visions of emotional forms inhabiting inviting puzzles, or serene complex linear structures connected by looping bolts of pure pigment. They are alive. You are alive.

Alan is extremely prolific, laboring away for 12 hours each day, working anywhere in NYC from home, on the bus, his studio, his performances, friend’s hangouts, even doctor’s visits. He has produced over 2,500 completed artworks in spite of enduring massive trauma to his physical body.

“I am Michael Alien, an alien who wants good and to exist with a twist of chaos and a big splash of toxic paint!”— Art Info

For Michael Alan, art is a combination of harmonious opposites, close observation, catharsis, a means of communication and a radical juxtaposition of dimensional elements. He challenges everything: concepts of figure, composition, media and movement, including the language of drawing. Exploring the ambiguity of time and history, Alan’s work focuses on translating energy into images.

Alan was born in the summer of 1977, in Bushwick during the New York City blackout. His work has been featured in 9 New York solo shows, over 200 group shows, and over 200 Living Installations. His work has been discussed in over 200 publications, books and media sources, including the New York Times, The Huffington Post, Bomb Magazine, Art 21, NBC’s Today Show, Marie Claire Italia, Frank 151, Art+Auction, the New York Post, Fox Channel 5, the Village Voice’s “Best in Show”, The Creator’s Project, Art Forum, the Gothamist, Time Out New York, Vice, Frame, American Artist, Animal, Hyperallergic, Curbs and Stoops, Cacao and many more.

In addition to his work as a multi-media artist, Michael is the founder and director of the Living Installation, where human beings are transformed into unique, living art objects. These happenings are often set to Alan’s original music, which is recorded featuring artists such as Tim “Love” Lee, Mike’s mom and dad, Renaldo of Renaldo and the Loaf, The Krays, Jello Biafra, Jesse from Yuppiside, The Residents, Tommy Ramone, Ariel Pink, Meredith Monk, Japanther, Ramsey Jones, Geneva Jacuzzi, 3 Teens Kill 4 (remix), Odd Nasdam, and Satellite Jones.