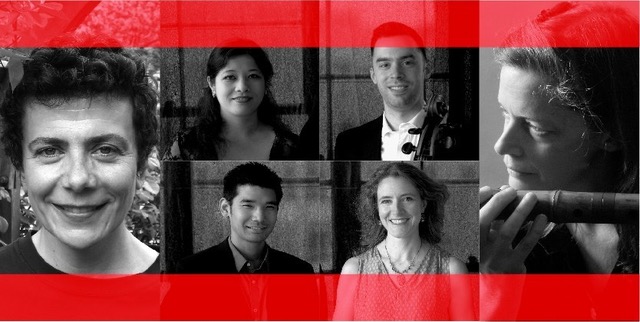 On Thursday, December 5th, 2019, 8pm, the Interpretations Series continues it 31st season with composers Elizabeth Brown and Frances White with the Momenta Quartet (momentaquartet.com). Held at Roulette, 509 Atlantic Ave, Brooklyn, NY, tickets are $20 for adults / $15 for students & seniors, and available on www.Roulette.org and www.Interpretations.info.

This dynamic program features Momenta alongside baritone/narrator Thomas Buckner and Elizabeth Brown in her equal capacity as a master of the shakuhachi: a traditional Japanese flute. The concert includes two new works written specifically for this concert, with commission funds provided by The Sparkplug Foundation and a New Music USA Project Grant.

The NY premiere of Brown’s Dialect for solo shakuhachi, which uses repeating, morphing phrases to trace the evolution of a unique language. Then the world premiere of Babel continues the linguistic theme in a positive spin of the myth, celebrating NYC as a living organism, using multilingual pages and recordings of Emma Lazarus’ verse from the Statue of Liberty. Unlike the traditional story, nothing here is destroyed; instead, it is cumulative, with its architectural history visible, its constant influx of immigrants the source of its life and beauty. And White’s The book of evening for quartet and shakuhachi (also a world premiere) is drawn from the Mark Strand poem Moon, with the musical arrangement evoking “the moon between the clouds.” Strand’s moon creates a path to “those places where what you had wished for happens.” The music reflects that, evoking a longing for that place, vanishing as the book of evening closes.

Dedicated to the Momenta Quartet, Brown’s Just Visible in the Distance draws its title, inspiration, and form from W.G. Sebald’s book The Rings of Saturn. The piece, inspired by Sebald’s continuous narrative arc, consists of intuitively-assembled small movements, each flowing into the next. Then White’s And so the heavens turned, for quartet and narrator, contemplates the mystery of storytelling itself. A collaboration with writer James Pritchett and inspired by the 11th-century Persian epic Shahnameh, the text is read before the music and during its closing, evoking at times the anguish and passion of the epic’s mythic lovers, at others a questioning stillness.

Interpretations continues its tradition of playing host to composers, interpreters, and improvisers — artists of both local and international scale, with myriads of approaches to music.

On the heels of last year’s acclaimed 30th anniversary, the Interpretations Series is dedicated to nurturing the relationship of innovative composers with the growing community of new music virtuoso performers. “When we started, this was a real need, especially for the more experimental new music,” says Founder and Artistic Director Thomas Buckner. “Now we are experiencing a blossoming of new music groups and solo performers, which makes the series necessary in a new way. There are so many exceptional composers and performers who need a great place to perform.”

Momenta: the plural of momentum – four individuals in motion towards a common goal. This is the idea behind the MOMENTA QUARTET (www.momentaquartet.com), whose eclectic vision encompasses contemporary music of all aesthetic backgrounds alongside great music from the recent and distant past. The New York City-based quartet has premiered over 150 works, collaborated with over 200 living composers and was praised by The New York Times for its “diligence, curiosity and excellence.” In the words of The New Yorker’s Alex Ross, “few American players assume Haydn’s idiom with such ease.”

Momenta has appeared at such prestigious venues as the Library of Congress, National Gallery of Art, the Smithsonian’s Freer Gallery, and abroad at renowned festivals such as Ostrava Days in the Czech Republic and the Cervantino Festival in Mexico. Recent and upcoming highlights include residencies and performances at the Institute Laredo in Cochabamba, Bolivia, and closer to home at the Phillips Collection in Washington, D.C., Washington University in St. Louis, Williams College, and Bates College, where they join the music department as 2019-20 Artists-In-Residence. They are also involved in a project to perform and record all thirteen string quartets by Mexican microtonal maverick Julián Carrillo (1875-1965) over the next three years, as well as featuring new works from Avil Singleton for their 2019-20 season.

ELIZABETH BROWN (www.elizabethbrowncomposer.com) combines a composing career with a diverse performing life, playing flute, shakuhachi, and theremin in a wide variety of musical circles. Her music has been heard in Japan, the Soviet Union, Colombia, Australia, South Africa and Vietnam as well as across the US and Europe, and includes many compositions for traditional Japanese instruments. Recent activities include touring Japan and the U.S. with her trio of two shakuhachi and ichigenkin (one-string koto); premiering Dialect, for solo shakuhachi, at the World Shakuhachi Festival 2018 in London; playing theremin with the Boston Symphony; and playing flute with the New York City Ballet Orchestra.

A Juilliard graduate and Guggenheim Fellowship recipient, Brown has received grants, awards and commissions from Orpheus, St. Luke’s Chamber Ensemble, Newband, Asian Cultural Council, Japan/US Friendship Commission, Japan Foundation, Music from Japan, NewMusicUSA, NYSCA, and NYFA. She was a Fellow at Bellagio and at the MacDowell Colony, and Artist-in-Residence at the Hanoi National Conservatory and in Grand Canyon National Park. Her CD Elizabeth Brown: Mirage is available from New World Records.

FRANCES WHITE (www.rosewhitemusic.com) is a composer of instrumental, vocal, and electronic music. Her music has been called “stunning” (American Record Guide) “moving” (Fanfare), “spectacularly beautiful”, and “so atmospheric and sensuous it is almost fragrant” (Musicworks). She is particularly known for her works combining live performers and computer-generated electronic sound spaces. Her music conveys intimacy and immediacy, with a tactile and deeply expressive approach which derives from a sincere belief in the transformative nature of sound. White studies the shakuhachi (Japanese bamboo flute), and finds that its unique spiritual and sonic voice informs her work as a composer.

A 2004 Guggenheim fellow, Frances White has received awards, grants, residencies and commissions from organizations such as the Fromm Foundation, the MAP Fund, the New Jersey State Council on the Arts, the Ditson Fund, Prix Ars Electronica, the Copland Fund, the International Computer Music Association, the New Jersey Symphony Orchestra, The Crossing Chamber Choir, The Dale Warland Singers, the Bang On A Can Festival, The MacDowell Colony, and the Djerassi Resident Artist Program, among many others. Most recently, her music has been featured in the installation Tracing on the farther side at the 2020 Venice Biennale.
White’s music can be heard on CD on the Wergo, Centaur, Nonsequitur, Harmonia Mundi, Albany, Ravello, Mode, MSR Classics, and Bridge Records labels. White’s music was featured as part of the soundtrack of three of Gus Van Sant’s award-winning films: Elephant, Paranoid Park, and Milk.

Buckner has appeared at Lincoln Center, Carnegie Hall, the Herbst Theatre, the Art Institute of Chicago, the Berlin Spring Festival, the Huddersfield Contemporary Music Festival, the Prague Spring Festival, and the Angelica Festival of Bologna. He is featured on over 50 recordings, including 6 solo albums, the most recent being “New Music for Baritone & Chamber Ensemble,” which includes works by Annea Lockwood, Tania Leon, and Petr Kotik. Buckner also appears in the CD/DVD “Kirili et le Nymphéas (Hommage à Monet)” filmed at the Musée de l’Orangerie, Paris, which houses the Monet’s celebrated Water Lilies murals.

For the past 31 years Thomas Buckner has curated the Interpretations series in New York City, and continues to produce recordings on the Mutable Music label, introducing current artists and repertoire, as well as presenting important historic material, previously unavailable in CD format.

ABOUT INTERPRETATIONS
The Interpretations series, now in its 31st season, is a New York-based concert series focusing on the relationship between contemporary composers and their interpreters. Sometimes the interpreters are the composers themselves; more often, the series features performers who specialize in the interpretation of new music. Since its inception in 1989, Interpretations has featured leading figures in contemporary music and multimedia, including Muhal Richard Abrams, Robert Ashley, Anthony Braxton, Thomas Buckner, FLUX Quartet, Joseph Kubera, Annea Lockwood, and Alvin Lucier, Roscoe Mitchell, Phill Niblock, Pauline Oliveros, Ursula Oppens, and Morton Subotnick.

Interpretations began as a collaboration with Robert and Helene Browning and the World Music Institute, presenting concerts at Merkin Concert Hall, then at Roulette, at its Greene Street location in Soho. When Roulette moved to the current space in Brooklyn, Interpretations moved with it. Interpretations is thrilled to co-produce at Roulette, which has developed into a premiere venue for new and innovative music, with excellent acoustics and world-class technical facilities.

All concerts begin at 8pm unless otherwise noted.