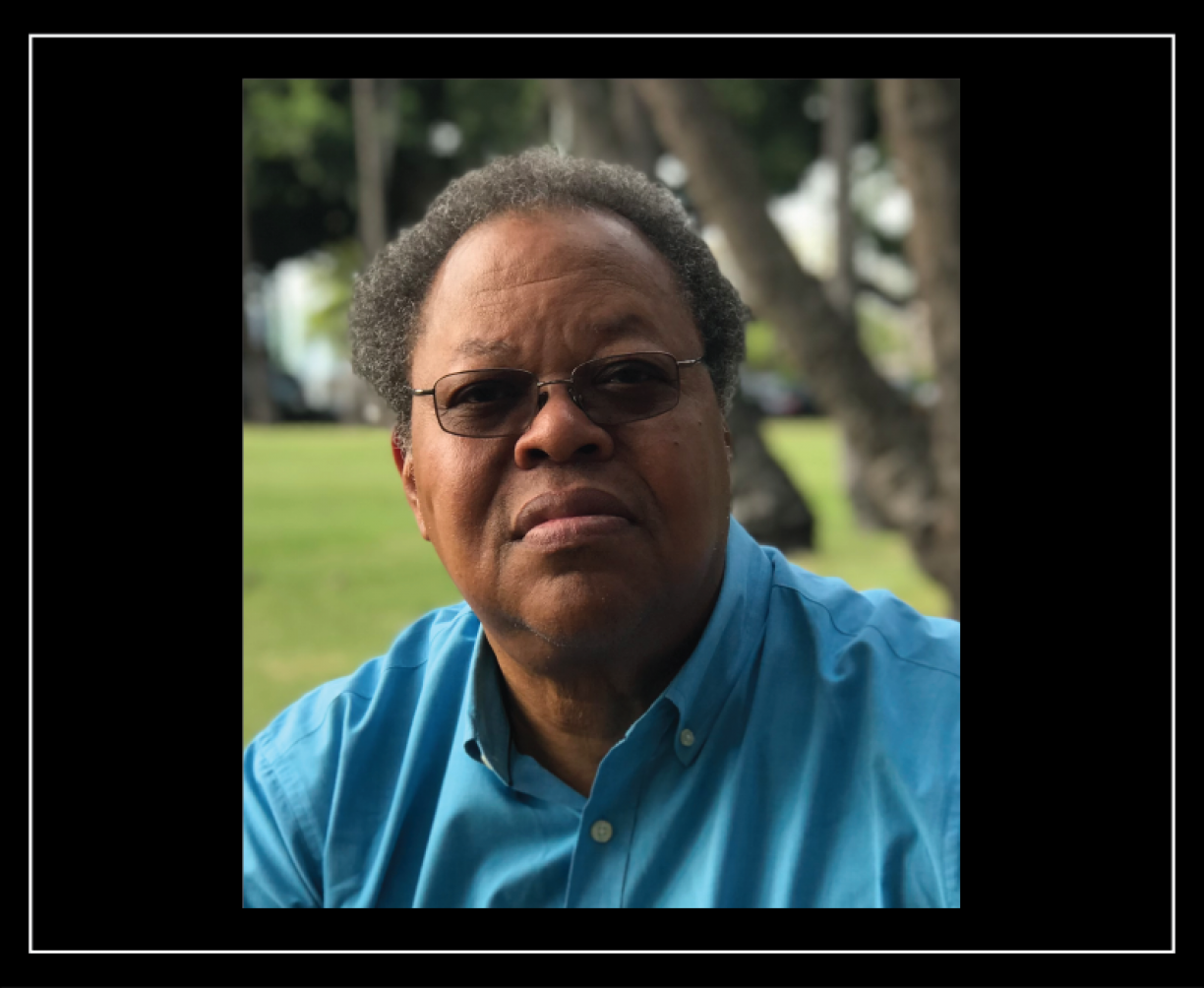 As part of a series of celebratory events at ISSUE’s 22 Boerum theater, Thursday, March 26th, ISSUE is pleased to present an evening of recent electroacoustic works from visionary composer, trombonist, and scholar George Lewis. Known for his astonishing level of creativity and expansive critiques of many traditional conceptions about experimental music, Lewis has charted new ground in the fields of improvisation, interactive music, nonhierarchical collaboration, and computer music. Lewis has also worked as a trombonist in bands for years, served as a curator at The Kitchen, developed Voyager (an early and groundbreaking software capable of improvising with live performers), and authored a monumental history of the AACM (Association for the Advancement of Creative Musicians).

Emergent, written for flutist Claire Chase, is the first in this series. Here, the delays, trajectories, and timbre transformations combine to create a musical dance of agency. Although the work does not deploy explicit models of self-similarity, the more immediate spatial trajectories expand into larger trajectories of analogous affect across the progress of the piece.

Not Alone, the second work in the series, was written for cellist Seth Parker Woods. The electronics and the cello blend, intersect, and ultimately diverge into multiple digital personalities that can suddenly converge into unified ensembles while shrouding their origin in processes of repetition. The composition is dedicated to cellist Abdul Wadud, one of the leading members of the Black Artist Group.

Seismologic, the third piece in the series, was written for bassoonist Dana Jessen, with inspiration from the musically oriented seismologist Ben Holtzman of Columbia University. Here, foreground and background deliberately conflate, and delays are used create Doppelgängers that blur the boundaries between original and copy, or even transform the bassoon into an ultra-contrabassoon.

Memory/Mutation, written for the duo String Noise (Conrad Harris and Pauline Kim), is the latest in the series, and the first to feature more than one acoustic instrumentalist. Listeners might be surprised to hear that this piece was inspired by the duo’s extraordinary performance at Ostrava Days 2017 of an Alvin Lucier work for two violins.

Not Alone (2014-15), for cello and electronics
Seth Parker Woods, cello

Before the long-awaited renovation of our 22 Boerum theater begins in April, ISSUE presents a special series of events that reflect on the organization’s trajectory as a home for experimental performance. Featuring artists from across our history as well as new projects, these events mark a milestone moment to celebrate in the theater and support ISSUE as we embark on a period of off-site programming. Join us in bringing commissions, premieres, and rare performances to new contexts and spaces throughout New York City.

George E. Lewis, Professor of American Music at Columbia University, Area Chair in Composition, and member of the faculty in Historical Musicology, is a Fellow of the American Academy of Arts and Sciences and the American Academy of Arts and Letters, a Corresponding Fellow of the British Academy, and an Honorary Member of the American Musicological Society. Lewis’s other honors include a MacArthur “genius” Fellowship (2002), a Guggenheim Fellowship (2015), and the Doris Duke Artist Award (2019). A member of the Association for the Advancement of Creative Musicians (AACM) since 1971, Lewis’s work in electronic and computer music, computer-based multimedia installations, and notated and improvisative forms is documented on more than 150 recordings. His work has been presented by the BBC Scottish Symphony Orchestra, Ensemble Dal Niente, Ensemble Intercontemporain, London Philharmonia Orchestra, Talea Ensemble, International Contemporary Ensemble, Musikfabrik, Mivos Quartet, London Sinfonietta, Spektral Quartet, and others; his opera Afterword (2015) has been performed in the United States, United Kingdom, and the Czech Republic. He is the author of the award-winning book, A Power Stronger Than Itself: The AACM and American Experimental Music (University of Chicago Press 2008), and co-editor of the two-volume Oxford Handbook of Critical Improvisation Studies (2016). An Honorary Member of the American Musicological Society, Lewis holds honorary doctorates from the University of Edinburgh, New College of Florida, and Harvard University. Lewis’s music is published by Edition Peters. See https://music.columbia.edu/bios/george-e-lewis

Laura Cocks is a New York based flutist who works in a wide array of creative environments as a performer and promoter of contemporary music. Laura is the flutist and executive director of TAK ensemble, a group of “young fearless players” (Boston Globe) with whom she “slays the thorniest material like it’s nothing” (WQXR). TAK has been in residence at institutions such as Stanford University, Columbia University, Cornell University, University of Pennsylvania, and the Delian Academy and has released three albums to critical acclaim, with their latest release on the newly founded TAK editions label. Laura is also a member of the Nouveau Classical Project and the Association of Dominican Classical Artists and is a frequent guest with ensembles such as Talea Ensemble, International Contemporary Ensemble, and Wet Ink Ensemble. She can be heard with TAK, International Contemporary Ensemble, Wet Ink Ensemble, and others on labels such as Carrier Records, ECM, New Focus Recordings, Sound American, Denovali Records, Orange Mountain Music, Double Whammy Whammy, Winspear, and Gold Bolus.

Hailed by The Guardian as “a cellist of power and grace” who possesses “mature artistry and willingness to go to the brink,” cellist Seth Parker Woods has established a reputation as a versatile artist straddling several genres. In addition to solo performances, he has appeared with the Ictus Ensemble (Brussels, BE), Ensemble L’Arsenale (IT), zone Experimental (CH), Basel Sinfonietta (CH), New York City Ballet, Ensemble LPR, and Orchestra of St. Luke’s (US). A fierce advocate for contemporary arts, Woods has collaborated and worked with a wide range of artists ranging from the likes of Elliott Carter, Heinz Holliger, G. F. Haas, Helmut Lachenmann, Klaus Lang, George Lewis and Peter Eötvos to Peter Gabriel, Sting, Lou Reed, Dame Shirley Bassey, and Rachael Yamagata to such visual artists as Ron Athey, Vanessa Beecroft, Jack Early, Adam Pendleton, and Aldo Tambellini. In recent years, Woods has appeared in concert at the Royal Albert Hall—BBC Proms, Snape Maltings Festival, the Ghent Festival, Musée d’art Moderne et Contemporain, Le Poisson Rouge and the Bohemian National Hall, Cafe OTO, Huddersfield Contemporary Music Festival, Klang Festival-Durham, INTER/ actions Symposium, ICMC-SMS Conference (Athens, GR), NIME-London, Sound and Body Festival, Instalakcje Festival, Virginia Tech, La Salle College (Singapore), and FINDARS (Malaysia), among others. In Autumn 2019, Woods joined the performance faculty at the University of Chicago as a Lecturer/Artist in Residence for Cello and Chamber Music. He previously served on the music faculties of Dartmouth College and the Chicago Academy of the Arts, and holds degrees from Brooklyn College, Musik Academie der Stadt Basel, and a PhD from the University of Huddersfield. At present, he is the Artist in Residence with the Seattle Symphony and the interactive concert hall, Octave 9: Raisbeck Music Center.

Praised for her diverse talents, bassoonist Dana Jessen is active as a soloist, improviser, chamber musician, and new music specialist. Dana is the co-founder of Splinter Reeds, an Oakland-based reed quintet, and has performed with the San Francisco Contemporary Music Players, Alarm Will Sound, Amsterdam’s DOEK Collective, and Anthony Braxton’s Tri-Centric Orchestra, among others. Dana’s debut solo album, Carve, was released through Innova Recordings in 2017 and features four newly commissioned works for bassoon and electronics alongside solo acoustic improvisations. The album has received celebrated reviews and mentions from the Chicago Reader, All About Jazz, and ATTN:Magazine, among others. Additional recordings can be heard on Cantaloupe Records, New Focus, Innova Recordings, Ravello, RIOJA, Oberlin Music, Evil Rabbit and New World Records. Dana is currently based in Oberlin, Ohio, where she serves as Associate Professor of Contemporary Music and Improvisation at the Oberlin Conservatory as well as the Director of Professional Development. More at www.danajessen.com

String Noise is known as New York’s most daring violin duo. Since their debut at Ostrava New Music Days in 2011, violinists Conrad Harris and Pauline Kim Harris have expanded the repertoire with over 50 new works. Nearly a decade later, they continue to break down the boundaries of traditional expectations and inspire innovative compositions, displaying formidable virtuosity, integrating multimedia art, electronics, improvisation, video projections, opera and dance.

Pauline Kim Harris, aka PK or Pauline Kim is a Grammy-nominated violinist and composer. The youngest student to have ever been accepted into the studio of legendary violinist ‪Jascha Heifetz‬, she has since appeared throughout the US, Canada, Europe, Asia and Australia as soloist, collaborator and music director. Known for her work with classical avant-punk violin duo String Noise, she has toured extensively with ‪Orpheus Chamber Orchestra‬ and continues to collaborate with leading new music ensembles in New York City. Active in the experimental music scene, her work extends into interdisciplinary worlds, crossing boundaries and connecting visual art, electronics, media, film and dance to music. She has premiered and recorded works by Alvin Lucier, John Zorn, Philip Glass, Steve Reich, George Lewis, David Lang, Du Yun, Annie Gosfield and more. Pauline Kim was the first Music Director for the Bill T. Jones/ Arnie Zane Dance Company and has been the featured artist for choreographers David Parker and Pam Tanowitz. As a composer, Pauline searches for a tactile connection between memory and sound. Her music creates a multi-dimensional sonic matrix through composition, transporting the listener to an alternate co-existence. She introduces an environment that alters the listener’s emotional identity to what they are experiencing. Pauline’s debut album, Heroine — a classical-ambient reimagining of the Bach Chaconne and Ockeghem’s Deo Gratias is available on Sono Luminus with worldwide distribution.