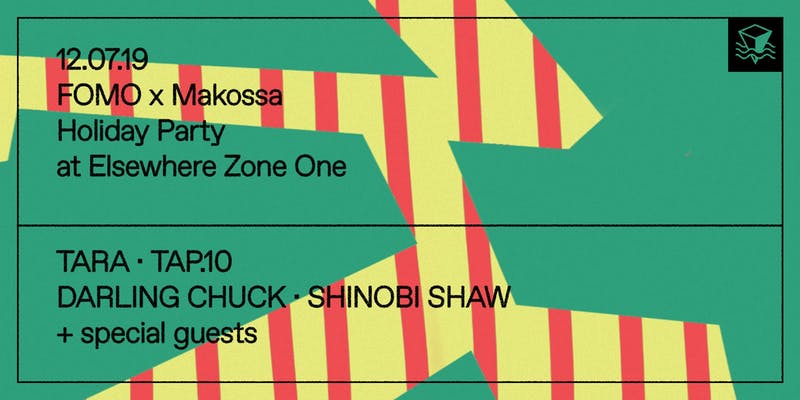 Were you there on that beautiful early fall day in September? The day FOMO Party and Makossa joined forces and threw a rooftop jam at Elsewhere that had people smiling from ear to ear and in their happiest of places all day? Or did you see the photos afterwards and kick yourself for not making it out? Whichever the case, we had so much fun that we decided to give it one more go before this crazy year expires. Bring your family to come party with ours. It’s gonna be one of THOSE, y’all. Bear witness as we take over Zone 1, spread some holiday cheer and give the decade a filthy kiss goodbye.

ABOUT MAKOSSA COOKOUT: 2019 marks the tenth consecutive summer for the Makossa Brooklyn Cookout. Holding court as one of the best outdoor summer soirees in Brooklyn, Latin Soul Brothers links up with NYC-based event team Rare Form to bring the famous Makossa sound from San Francisco to NYC to create a bicoastal vibe like none other. Since its birth in the backyard of Williamsburg boutique/gallery Fresthetic in 2010, the monthly cookouts have garnered a loyal following and experienced incredible growth, including the Makossa Los Angeles Cookout, the Makossa Oakland Cookout and a three-city tour in 2017 (Charlotte, Chicago, and Atlanta) sponsored by Miller Lite.

ABOUT FOMO: Since its inception in 2015, FOMO has attracted a loyal community of creatives, artists and musicians alike, with an eclectic, neighborhood dance party vibe. Through special guest performers and DJs, head turning visuals, and a focus on new and emerging music alongside club classics, FOMO aims to push hip-hop and dance culture forward. Now in its fourth consecutive year, the brand has grown to include pop-ups and strategic partnerships (Dolby, Reebok, Airbnb), seamless collaborations with other established events (Everyday People, The Rub, The Arena), and strong opportunities to bring the party to outer markets.