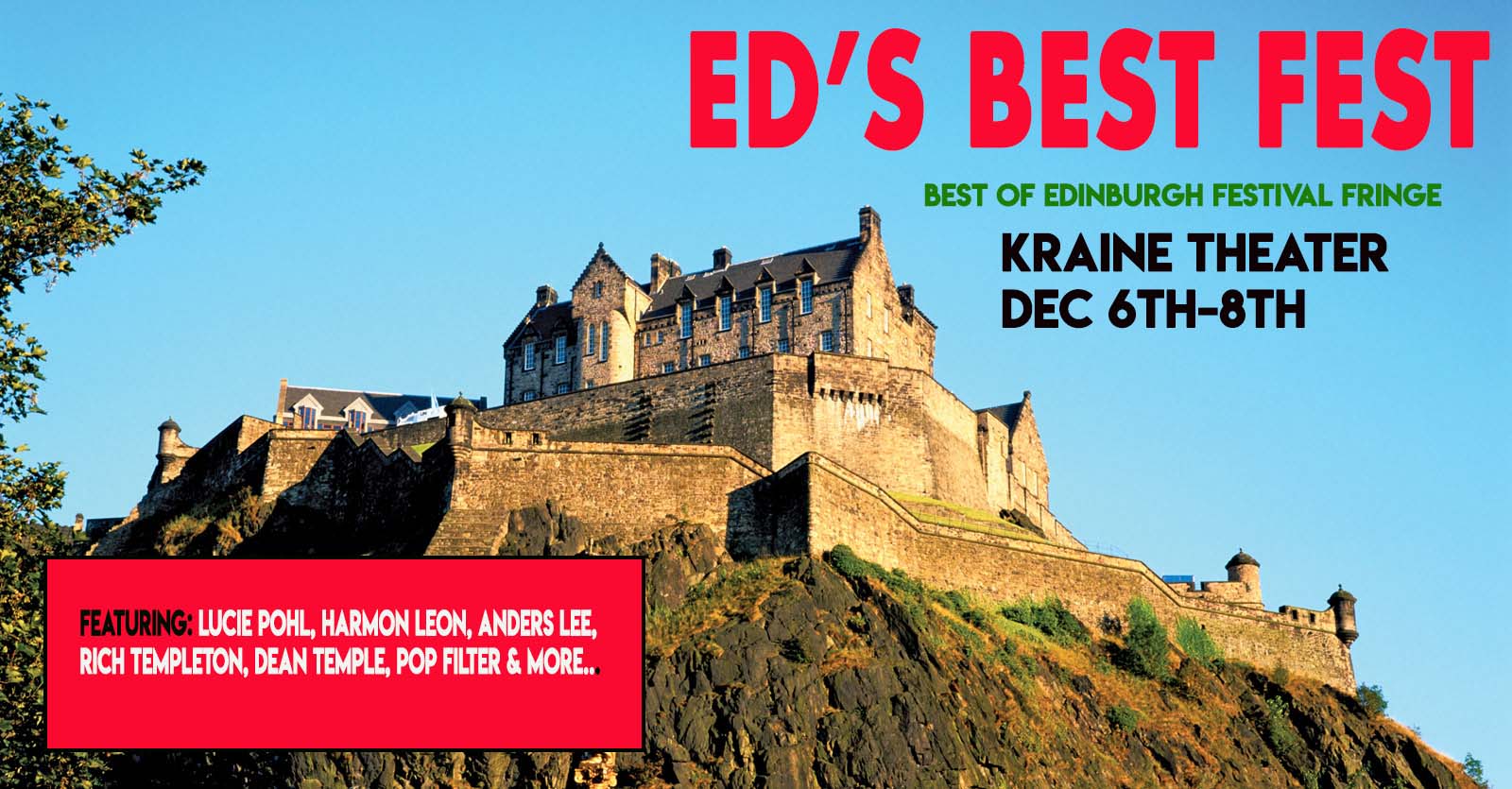 The Kraine and Harmon Leon (Vice, This American Life) and thrilled to bring you a weekend of shows – featuring some of the best NYC performers who have appeared at the Edinburgh Festival Fringe.

No need to go to Scotland in August – we are bringing the best of what Edinburgh has to offer.

NYC comedian Lucie Pohl creator of Edinburgh and off-Broadway hits Hi, Hitler, Cry Me A Liver, Apohlcalypse Now! and voice of Overwatch’s Mercy just wants to be really really real and brings you a show about being a video game celebrity with a bathtub in her kitchen. As seen on Red Dwarf XI, Homeland, Fantastic Beasts and Where To Find Them. ‘I love Lucie!’ (Steve Coogan). ‘Crazily funny!’ ***** (BroadwayBaby.com). ‘Destined for stardom!’ **** (Metro). ‘Absolutely hilarious!’ ***** (Mirror). ‘Delightful!’ (New York Times). Times Critic’s Pick.

Harmon Leon’s American Horror Story
Comedian/Journalist (Vice, This American Life) Harmon Leon has made a career infiltrating extremist groups in America. Take Harmon’s hand as he brings you on a multimedia journey into his true-life exploits infiltrating such oddities of American life as a Christian teen purity ring ceremony, a staring cult, and a gathering of 5000 assault weapon enthusiasts.

Richard Templeton: The Piece
The Piece is back to baffle, amuse and confuse – all while demanding perfection (‘silencio!’) in the dark. Part-comedy, part-performance art, part endurance-test, The Piece follows the disintegration of The Artist as he tries desperately to put on the show of his life, but something keeps getting in the way. Honestly, it’s probably you. Fringe Experience Award 2018;

‘Experiential madness! Most memorable show of 2018 – be it good, bad, or plain strange’ (TheWeeReview.com).

Dean Temple: Voice of Authority The US Dept of Justice is suing Dean for $19 million. What he needs is a lawyer. What he gets is a ballet dancer. A true story about turning your worst catastrophe into a pretty damn good musical number.

Max White: People in our life who raise us, we don’t get to pick.

8:30 Anders Lee: Dummy
A comedy about the autistic spectrum. Everybody’s on it. Diagnosed at a young age with autistic spectrum disorder, American comedian Anders Lee dives headfirst into questions of education, social cues, diagnosis and what it truly means to be dumb. Through jokes and stories, Lee reflects on his own experience growing up with an autism label as well as the dark, eugenicist history of the diagnosis itself. ‘Funny, heartwarming and thought-provoking’ **** (LiveLondonPost.com). ‘It is thanks to dedicated people like Lee that we can fight ignorance and acquire a more open-minded approach’ **** (Everything-Theatre.co.uk).