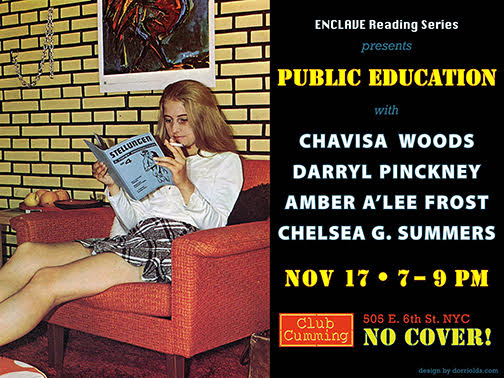 Shirley Jackson Award winning Brooklyn-based author, CHAVISA WOODS’ third book, Things To Do When You’re Goth in the Country, exposes the horrors of an America that has always existed, but whose demons, for many, are only now being revealed. She received praise from Publisher’s Weekly, Booklist, Electric Lit, and actress Emma Roberts (American Horror Story/Scream Queens). Her latest work, 100 Times (A Memoir of Sexism) received praise from the New York Times, The Stranger, LA Weekly, The Seattle Review of Books, and others. Her work has appeared in Tin House, LitHub, Electric Lit, The Brooklyn Rail, The Evergreen Review, New York Quarterly, and many other publications. She has appeared on The Young Turks, NPR’s 1A, at Town Hall Seattle, the Whitney Museum of American Art. She also won the Cobalt Fiction Prize, the Kathy Acker Award in Writing, The Jerome Foundation Award, and is a three-time Lambda Literary Finalist.

AMBER A’LEE FROST is a writer and musician in Brooklyn. She is a contributor the The Baffler and was contributor to Rosa Luxemburg: Her Life and Legacy and False Choices: The Faux Feminism of Hillary Rodham Clinton. She is a co-host of the podcast Chapotraphouse.

DARRYL PINCKNEY is a long time contributor to The New York Review of Books, the author of two novels, High Cotton (1992) and Black Deutschland (2016), and two works of nonfiction, Out There: Mavericks of Black Literature (2002), part of the Alain Locke Lecture Series, and Blackballed: The Black Vote and US Democracy (2014). Other periodicals to which he has contributed include FMR, Freibeuter, The Guardian, Harper’s, Los Angeles Times, The Nation, The New Republic, The New Yorker, the New York Times Book Review, The Paris Review, Slate, TLS, Vanity Fair, and Vogue. His several theatrical collaborations with director Robert Wilson have appeared internationally and at Brooklyn Academy of Music. Pinckney has been a Hodder Fellow at Princeton and received The Harold D. Vursell Award for Distinguished Prose for the American Academy of Arts and Letters and a fellowship from the John S. Guggenheim Foundation.

CHELSEA G. SUMMERS is a recovering academic, ex-stripper who writes almost exclusively about sex. Her work has appeared in Hazlitt, The New Republic, VICE, Guardian US, and various other media outlets. Her debut novel, A Certain Hunger, will be published in October 2019.